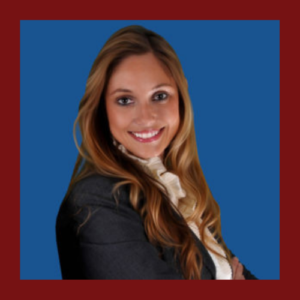 Laura joined the Junior League of New Orleans in 2010 and transferred to Orange County in 2014. She grew up attending League events with her mother and knew from a young age the importance and impact the League has on its members and the community. In New Orleans, Laura served on the Kitchen Tour and Gala committee, as a Provisional Advisor, and on the Board of Directors as the House Counsel-Elect. In Orange County, Laura has worked on several committees including: Programming, Public Affairs, Human Trafficking, and Alternative Revenue. Laura has served on the Fund Development Council as the Contributor Relations Manager and on the Board of Directors as a Director At-Large, President-Elect, and President.

Laura is a graduate of Loyola University College of Law. Laura was active in student affairs, serving as member of the Loyola Education Board, Dean Selection Committee, and elected president of the Student Bar Association. Laura worked for the City of New Orleans advocating for juvenile justice and served as the alumni admission advisor for Loyola College of Law. Laura moved from New Orleans to California in 2012 to join the law firm of Heaviside Reed Zaic. She resides in Dana Point with her husband and her adorable 3-year-old and 1-year old sons.