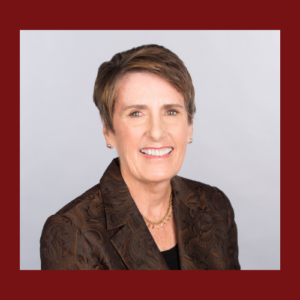 This is Janet’s seventh year on JLOCC’s Board of Directors, including a term as President, and two additional two years on an AJLI committee that dealt with public policy issues, representing Junior Leagues in the western United States. Janet continues her involvement in JLOCC, crediting it with her best opportunities for training and community service – and close friends.

Currently, Janet serves on the Advisory Councils of the Orange County Community Foundation, the Friends of CASA and the Assistance League of Irvine.

Janet was a founding Board member of the Orange County Community Foundation and served on that Board of Directors for 12 years.  During this time, she chaired the Foundation’s grantmaking committee, which oversaw gifts of many millions of dollars to non-profits in Orange County.  She also served as Vice-President of OCCF and on its Executive Committee.

She was also a founding Board member of the Irvine Public Schools Foundation, which brought together parents and the business community to support public schools in the Irvine Unified School District.

Janet is employed as Irvine Councilmember Anthony Kuo’s Senior Aide, and her employment history and includes years as a marketing coordinator for several civil engineering firms.

She and her husband have two grown sons and divide their time between their homes in Irvine and Colorado.