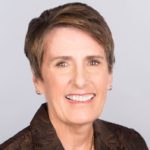 A founding Board member of the Orange County Community Foundation, Janet served as Vice-President and Grantmaking Chair, overseeing the donations of many millions of dollars. She was also a member of the Executive Committee of the American Red Cross – Orange County, the Board of Directors of the Volunteer Center (now OneOC), and was a founding Board member of the Irvine Public Schools Foundation. Appointed to the City of Irvine’s Planning Commission, Janet served terms as Chair and Vice Chair.

In the community, Janet is a member of the Advisory Councils of the Friends of CASA, the Orange County Community Foundation, and the Assistance League – Irvine.